I have been using Tweak.nl as my ISP for a few years now, since getting fiber-to-the-home, but Tweak doesn't have their own (non-KPN (incumbant dutch telco)) infrastructure in my area. This means they are limited in offering products provided by KPN, at prices mostly dominated by what they have to pay KPN to get access to the last-mile. In area's where they do have their own fiber infrastructure they can offer gigabit connections at very nice prices (less then €400 per year) and 10-gigabit even, but this is a bit overkill, especially since traffic is then quite limited :)

T-Mobile Thuis (which used to be Vodafone Thuis, but had to be split-off from Vodafone due to anti-compete measures) does have it's own infrastructure in my area, which means they can provide their own networking products. This translates into getting a symmetrical 750 mbit connection for €40,- per month (Sold as €50,- with a permanent 10,- discount). It can also include voice and TV-services, but these cost extra, and would only with if you let T-Mobile control your network by using their router. 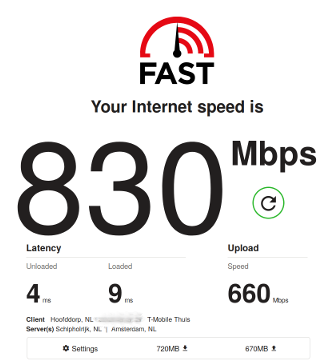 Sadly they still don't provide any form of native IPv6 connectivity, and I'm not too fond of letting ISP's control my routers and internet-infrastucture, so I looked into ways to get a fast and affordable connection whule using my own router, preferably running OpenWRT.

After some research on the Tweakers.net and T-Mobile Thuis web forums I was sure that it wouldn't be too hard to get a fast internet-connection on T-Mobile Thuis using my trusty OpenWRT routers. The requirements basically come down to:

I initially used a RouterBoard RB750Gr3, since I was already using that as a router for my Tweak connection, but I also had a few Edgerouter ER-X's around. Both routers basically are the same chipset, but with slightly different peripherals. The RB750 has a low amount of flash, but USB and MicroSD ports, so you can add external storage, the ER-X has no USB or MicroSD, but has 256MB of built-in flash, which is more then enough for everything you might want to install on it.

Both routers would be more then sufficient and powerful enough to route a gigabit connection, as they have 256MB of RAM, and a quad-core Mips24 800Mhz cpu. In the end I swapped out the RB750 for the ER-X, since I had a few of those and only one RB750 and would have no use for the USB port on the router.

Installing OpenWRT 18.06.1 is outside of the scope of this article, but I've written about installing it in an earlier post, and documentation is on the OpenWRT wiki

Connecting to the fiber

The first step is finding some way to connect the router to the fiber. There are basically 2 methods to do this:

If you want to go for the SFP method, be sure to get a router with SFP-ports, like the ER-X-SFP or the HEX_S

The internet vlan (300) will give you a public IPv4 address using a DHCP-request. This will also be the default gateway. The Management-lan (100) wil also respond to DHCP-requests, but only return adresses in 10.66.0.0/16 ip-space. There is some traffic on this network, but I haven't looked into it too much yet.

Posts on various forums informed me that IP-TV is normally configured on the 640 vlan. I myself don't use much TV, so I haven't done any configuration yet. T-Mobile also lets you use TV-Anywhere, which is a mobile application (IOS/Android) for streaming TV on any internet-connection, so this can be used as a zero-configuration alternative. I might update this post or publish a new one when I get TV-Streaming working, but I'll probably cancel the TV and voice subscriptions before too long, I only took them because it was cheaper with then without (the first 6 months).

The configuration of the switchports: